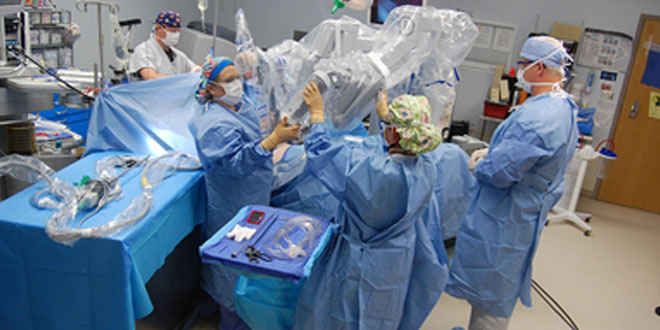 “Invention of robotic surgery is a revolution in the field of surgery as it has less bleeding and less stitches,” said Sindh secretary health, Iftikhar Ahmed Shalwani shortly after witnessing a robotic surgery performed at Sindh Government Qatar Hospital.

“Robotic surgeries are less painful and their recovery time is far better than manual surgeries,” he added.

At the outset, Mr Shalwani eulogized the services being rendered by doctors and paramedical staff of the hospital, saying it was heartening to note the health facility has been carrying out Robot surgeries regularly since the installation of Robotic surgeries machine.

The hospital’s medical superintendent Dr Khalid Masood told Mr Shalwani that since each robotic surgery costs between Rs 0.2million and Rs0.25m, this technique was exclusively being used for only those patients requiring this procedure. Besides, a handsome amount was being incurred for the maintenance of the machine and for purchasing its accessories,” he added.

Drawing the attention of the secretary towards the shortage of specialist doctors and nursing staff, the MS hoped that the SNE (Sanctioned New Establishment) of the hospital would be approved without any further delay.

The secretary was informed the hospital’s OPD is visited by around 3,500 patients daily.

Mr Shalwani said that all-out efforts would be made to help solve the problems being faced by the hospital on priority.

The secretary also visited the hospital’s dialysis centre where, according to the MS, about 750 dialyses are performed, every month, free of cost.

Over 60 doctors belonging to JPMC, Civil Hospital Karachi and doctors from the interior Sindh participated in the training programme.

Speaking on the occasion, JPMC’s deputy director (Administration) Dr Jawaid Jamali said that a three-member team of Korean doctors was imparting training to the participants of the programme.  In this connection, he said that an assistant professor of JPMC, Dr Naseem Baloch, who had recently got his training from Korea, was instrumental in inviting Korean doctors for providing training to the health practitioners in Sindh.

Secretary Shalwani hoped that training will boost the capacity of doctors in the province.

Mr Shalwani assured the JPMC administration that funds required for renovation of the hospital’s departments would be released shortly.