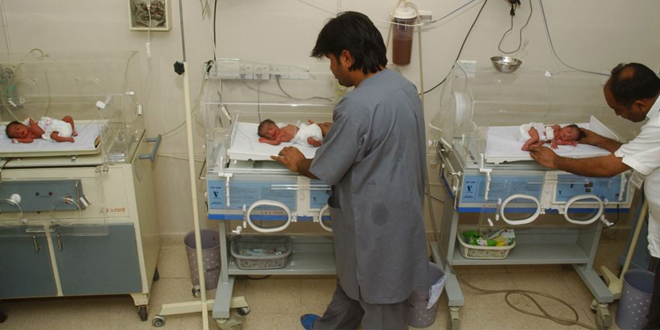 Pakistan’s depressing infant mortality rate: What we can do to reduce it

Over the years, infant mortality rate has decreased by 50% globally; Pakistan, however, is not one of those countries. Healthcare facilities all over the world are improving on a daily basis. Not only are the other nations technologically more advanced, the governments also take an interest on the healthcare state of their country and take initiatives in providing better facilities to their citizens.

Under nourished mothers with stressful state of minds play a huge role in the health (or the lack of it) of an infant. When a child is born to an undernourished mother, the odds of him/her being undernourished and weak are also high. That, topped with poor medical facilities, creates the perfect circumstances for a neonatal baby to die.

Anyone who has undergone the process of giving birth would know there is one or another complication even in the healthiest of pregnancies. Imagine an anemic mother who with little or no rest during pregnancy, pressure from in laws, and poverty, giving birth at home with no medical supervision. The odds of a healthy child coming to the world are awfully low. One of the main issues in rural areas of Pakistan is that there are not enough public hospitals. A number of villages share the same hospital which tends to get over crowded. The staff is over worked and unable to cater to everyone’s problems. Number of beds are extremely less, making the incubators even lesser.

Premature babies need to be kept in incubators and under constant supervision; in Pakistan, however, there is no such concept. Even basic facilities like oxygen, blood and glucose are not available for the premature neonatal. Specialists are not found on duties as the doctors also consider themselves under-paid, considering the amount of responsibility they have on their shoulders. That leaves us with not only lack of hospitals but also lack of healthcare workers.

Any society with a decent infrastructure and healthcare system would have maternity centers within every few miles, with trained gynecologists and obstetricians. Ambulance services and trained paramedics are every citizen’s right. Whether in urban or rural areas, until these facilities are provided, our situation in child mortality rate will remain hopeless while rest of the world gets better and more advanced by the day.

The Pakistani government needs to take these issues seriously. The government also needs to run campaigns to educate the masses about the importance of taking care of pregnant women, which is important for both the mother as well as the child. A nation cannot go ahead of its counterparts if the most basic facilities are not provided to its citizens. When a child is born, it’s his right to have basic medical care, and most importantly, the right to live and make himself useful for the nation. We might have lost some brilliant people because we were not competent enough to provide good medical care. It’s time to put a stop to it.