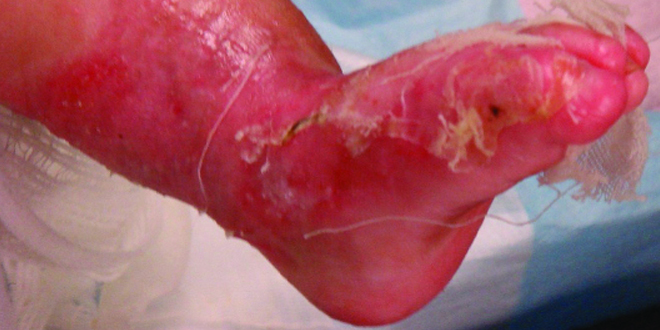 Epidermoslysis bullosa: A skin disease to stay clear of

Epidermoslysis bullosa (EB) is a genetically inherited disease which causes the skin to get more susceptible to touch or rub; hence blisters all over the skin appear upon the slightest rub or scratch.

Dystrophic epidermolysis bullosa (DEB) is the severest category of EB. However, its symptoms may vary from one individual’s case to another. While some may get blisters only on joints such an elbows and knees, others might have to face an extremely severe blistering which can potentially cause vision loss. As it is, DEB is a rare skin disease, its incidence of occurring is as low as 6.5 per million.

It is sub-divided into three major categories which have mutual features and the mutation on the same gene, COL7A1. This gene is responsible for assembling the type VII protein which is primarily responsible to make collagen. Collagen is the main structural protein which strengthens the muscle tendons, ligaments and skin. Type VII protein is also a major component of anchoring fibrils which adhere the outermost skin layer with the innermost, or the epidermis with the endodermis. However, mutations in this gene bring about an inability in the Type VII protein causing a disruption in the skin layer when even slightly touched or rubbed. This disruption further causes blisters which result in extensive scarring as they heal.

This is the most severe type and is autosomal recessive. Very often infants born with this disease exhibit missing skin patches. These are further accompanied by extremely hazardous blisters on the skin caused by any trauma during birth. These blisters are also found in the mucous membranes such as the mucous lining present in the mouth and the gastrointestinal tract. It makes swallowing and chewing the food very difficult hence increased chances of malnourished infants are present in this disease. Furthermore, nail growth is found to be stunted and fingers and toes are seen to be fused. Joint contractures are also commonly seen resulting in a restricted joint movement. Other sever cases are also likely to exhibit vision loss.

This is yet again an autosomal recessive type. However, it is considered to be mild than the one previously stated. Blistering in this case is limited to hands as well as feet and joints such as knees and elbows. Scarring in this case is also less severe. Overall, this is less life threatening because no occurrence of cancer is seen to be associated with it.

This is the mildest form, only abnormal nails are a sign of DEB in this case. Blistering is also limited to hands and feet, with no severe scarring or cancer associations.

As mentioned earlier, the symptoms of this disease are often overlapped hence skin biopsy is done for a cloer look at the condition of the skin. It’s done using immunofluroscent antibody/antigen mapping or through transmission electron microscopy. Another technique is the molecular testing approach. Its divided into three categories; single gene testing, multiple gene panel, genomic testing.

The main problem in treatment of this disease is impaired wound healing due to inflammation and immune reaction going on. Therefore prevention of inflammation is the main strategy behind the treatment of DEB. Along with regular whirlpool therapy and topical antibiotics, the wounds should be kept covered in semi occlusive non adherent dressings.

For gastrointestinal and oral lesions steroid therapy works along with phenytoin. Along with that good dental hygiene is recommended consisting of flossing followed by brushing with quality toothpaste.