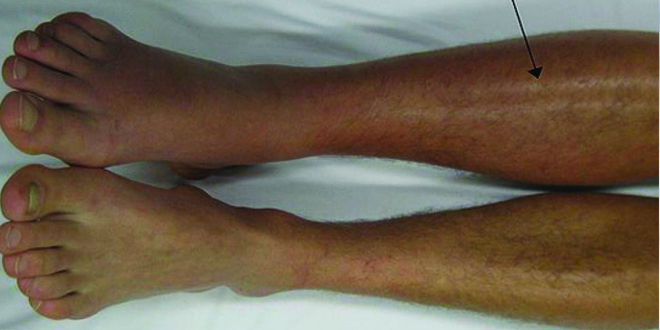 Deep vein thrombosis or DVT is a blood clot that forms in the deep veins of the lower extremities such as thighs or legs. The clot formation is due to a multitude of reasons, all of which boil down to the immobility of the limbs.

This clot may break off from its origin and travel to areas such as the heart or lung via the blood supply in the arteries and block them as well, causing damage to the organs. Blood clots are usually formed due to some abnormality in the way the blood coagulates, preventing blood from circulating or clotting properly.

Many factors increase the risk of developing deep vein thrombosis.

Genetics play a huge role in determining who is at a higher risk of developing DVT, the most susceptible of which are people with inherited bleeding/clotting disorders. In such people, the coagulation cascade of the blood is already abnormal and a very mild stimulus can aggravate the clot formation leading to DVT.

It can also happen if you don’t move for a long time, such as during paralysis, after surgery, following an accident or injury to the leg or thigh muscles, or when you are confined to a hospital or nursing home bed.

Obesity and pregnancy are two things that increase the pressure in the veins in the legs and pelvis. They also restrict movement to some extent, hence proving as a risk factor for DVT.

Oral contraceptives and hormone replacement pills both can increase your blood’s ability to clot.

Sitting for long periods of time at a stretch means that your calf muscles don’t contract for hours and the blood that is supposed to circulate, pools in the legs and increases the risk of clotting.

DVT can cause many complications in the body – the most significant and damaging of which is pulmonary embolism or PE. This occurs when a clot formed as a result of DVT usually in the leg travels through the blood and lodges itself in the blood vessels of the lung. This may prove to be fatal if not caught early.

PE causes death of the area of the lung not being supplied by blood. It may cause sudden onset of shortness of breath, chest pain that worsens with coughing, dizziness or light headedness, rapid pulse and coughing up blood.

Another common complication is post-thrombotic syndrome – also known as postphlebitic syndrome. This syndrome is caused by damage to the veins from the blood clot. This damage reduces blood flow in the affected areas. This syndrome presents as a number of signs and symptoms such as swelling of legs, skin discoloration, skin sores and leg pain.

Knowing the symptoms of DVT is very important as it can spare your life if caught in time without further aggravating the condition. Preventative measures should be taken by people who are at a risk of developing DVT. People who go through surgery are prescribed blood thinners which they must remember to take in time to prevent clots.

If you’ve had surgery or have been on bed rest, try to get moving as soon as possible. If you’ve been sitting still for a while, try not to cross your legs because this can constrict blood flow. If you’re traveling a long distance by car or plane, stop every hour or so and walk around.

Dr Madiha Sadie, from Ziauddin University says, “Special care should be taken by pregnant women who should wear pressure stocking and keep their limbs raised so as to maintain circulation in the legs”.