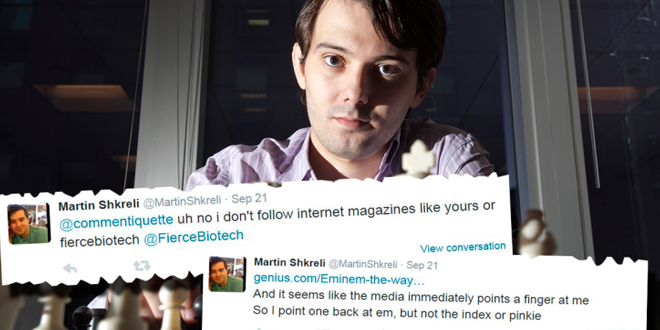 An ex-hedge fund manager in the USA has sparked public angst by purchasing the rights to a medication used to treat diseases related to AIDS and cancer, and by increasing its price from $13.50 to $750 overnight.

Martin Shkreli, a 32-year-old businessman based in New York, living a lavish lifestyle, purchased the drug Daraprim earlier this year in August.

The drug is used to treat a parasite infection, toxoplasmosis, which can result in life-threatening problems for people with weakened immune systems, like AIDS or Cancer, or even unborn babies.

The drug was developed in 1940 and is now commonly prescribed, but more in the US. The treatment of taxoplasmosis requires a course of 100 pills.

The medicine was earlier being sold at $13.50 each, but Turing Pharmaceutical increased the rate of the pill by 5000 percent up to $750 overnight.

In one press conference, the owner Mr. Shkreli informed the media that it was not greed that had motivated the company to plunge the price by these figures. It was instead a strategy to stay in the business, while claiming that other drugs for rare diseases were of equivalent prices to what the new price of the drug is.

“Daraprim is still under-priced relative to its peers.”

Meanwhile social activists are looking into his life. In his recent Instagram feed, he bragged about drinking fine alcohol. Earlier in July he had been cruising and riding around New York in his helicopter. Activists debate if Mr Shkreli is the right man to be attaining the rights of such an important drug.

In response to such debates, Mr Shkreli tweeted and addressed the critics with songs from rapper and songwriter Eminem.

For now, the HIV Medicine Association and the Infectious Diseases Society of America have sent a joint open letter to the company, Turing Pharmaceuticals, complaining about the price hike calling it unjustifiable and “unsustainable for the healthcare system.”

Doctors have started to face a shortage of the medicine already and need to find alternative therapies, but they worry that these might not be as effective.

How to order Soma Online without prescription in USA

Apricots used as medicine by locals in G-B

Eternity in an hour: A doctor’s musings