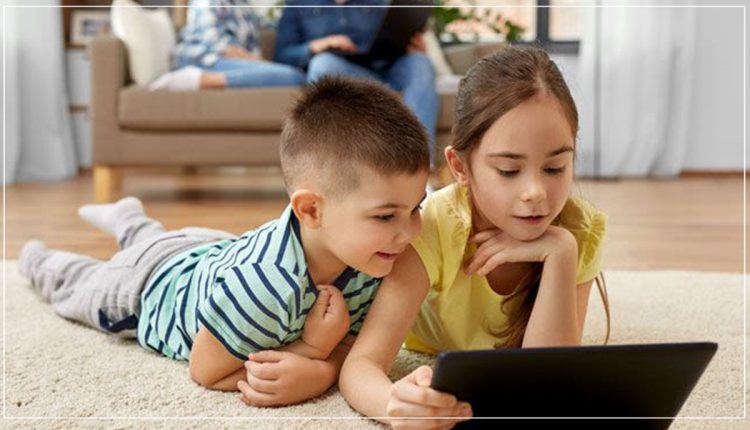 Not many of us know that the use (or abuse) of smartphones and tablets can cause various eye problems, especially among children who view on screens for long duration.

Dr Shahab Ul Hasan Siddiqui, who is an assistant professor at Baqai Medical University and a consultant ophthalmologist, says in the past in a class of 30 students, hardly two or three kids used to wear glasses. But the number of kids with eyeglasses on has increased over time and its mainly because of their excessive screen time.

It is important to note that adverse effects of screen time are mainly limited to tablets and mobile phones, as the distance between a TV screen and the place it is being viewed from acts as a buffer.

Related: How Much Screen Time Is Too Much For Your Kid?

“Constant use of screens weakens kids’ eye sights and those who already wear glasses their number increases,” he clarifies. Dr Siddiqui says a lot of parents come to me and say that the number of their child’s glasses has increased rapidly but it doesn’t happen overnight. “It’s just that parents are unaware until the child complaints of low vision when they are unable to view whiteboards in their classrooms,” he adds.

Ophthalmologist Dr Harris Shahzad says that using a handheld device excessively does cause ‘accommodation spasm’, which means the muscles in the eye that controls focus goes into spasm, that causes headaches and temporary visual disturbance.

“It also causes a myopic shift [an increase in negative power] in vision, meaning it would cause children to need glasses sooner than usual,” he explains.

Can mobile phones cause eye diseases?

The use of mobile phone or tablets in itself does not cause any diseases, says Dr Shahzad, “but can cause the need for glasses and headaches due to spasm.”

Moreover, among the physical symptoms, looking at your phone screen might cause the following:

In fact, its prolonged use can also trigger migraine and epilepsy.

Related: Sleeping With Smartphones, And Other Vices

Ten-year-old Fatima Khan* suddenly stopped blinking her eyes at school one day. She had a blurry vision and the school administration called her parents. “We took her to the hospital and were told that it was first stage of epilepsy,” says Fatima’s mother, Shahnaz*.

The doctors told Shahnaz to stop Fatima’s screen time for almost two months. However, later, she was allowed screen time for only 1.5 hours. “Fatima was on medication for two years and is still not allowed to use screens more than 1.5 hours a day,” informs Shahnaz.

However, Dr Shahzad informs that Fatima probably had a predisposition to epilepsy and flashing lights caused it to surface. “That’s why there are warning messages in movies that mention it has strobing/flashing lights and can trigger epilepsy,” he adds.

“Mobile phones and tablets have a protective screen that blocks UV rays so there is no danger in using them,” says Dr Shahzad.

But Dr Siddiqui mentions that an extended screen time can strain our eye muscles. However, it is important to note that staring at a bright smartphone screen in the dark does not harm our eyes.

Dr Shahzad says it’s a myth that using mobile phones in the dark can affect our eyes. “There is a video circulating on Facebook and various Whatsapp groups that it causes eye cancer. This is completely untrue and there is no scientific evidence to support that. If this was true, there would have been a health advisory from the manufacturers,” he says.

Having said that, Dr Siddiqui also mentioned using mobile phones in the dark can disturb sleep patterns. “Our brain releases different hormones during the day and night. Therefore, when we use screen at night it gives stimulus to our brain that it’s day time and that’s why it disturbs our sleep pattern,” he adds.

To live a healthy life, moderation is key as excessive use of anything let alone screens can harm us.