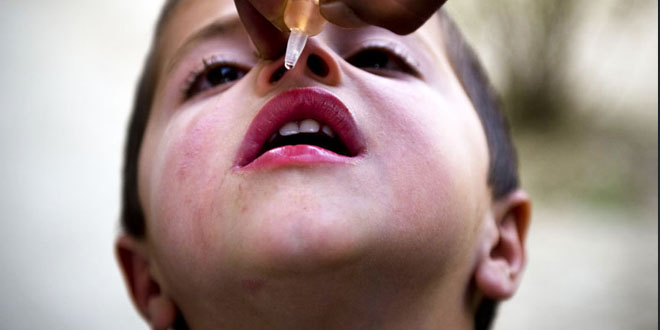 Following two long hauling decades of global vaccination campaigns, the world is at the edge of eradicating polio. Pakistan is one of the only three countries that are laboring under the huge burden of polio; Afghanistan and Nigeria being the other two.

The national campaign to wipe out polio and various deadly diseases from the roots has faced failure for the past few years and very recently, it was dealt with a devastating blow when the murders of the aid workers made headlines and pushed the agencies to suspend the polio crusade. Over 90 percent of the polio cases being reported are from four major transmission zones in Fata, Khyber-Pakhtunkhwa (K-P), Balochistan, central Punjab and Sindh.

Pakistan declared a national health emergency in January 2011, uncovering an action plan with a singular goal of disrupting transmission of the disease by the year’s end. Unfortunately, the initiative failed. A recent intensification of the disease with emerging violence has been highlighted, which unfortunately continues up to date. The incidence of the highly infectious disease is relatively low in peaceful areas like Punjab and Sindh, and high in K-P, FATA and Balochistan.

In 2011, Pakistan reported 198 fresh cases, being the highest in the world. Over 188 out of the 198 new infections reported to have emerged from violence-plagued areas. Similarly, 55 out of 58 cases in 2012 emerged from Balochistan, Fata and K-P. The ruling under the new leadership could have helped the government to eradicate polio from Pakistan; a goal we have almost achieved. However, the recent attacks on healthcare personnel, which included women, have raised fear and subsequent departure from respective duties, abandoning the vaccination campaigns and various health associated activities.

Many have spoken about the government responsibilities, highlighted the need for education of the masses, remote accessibility, promising security services and making this world an infection-free place to live in.

However, some friends and I sat down with the Pakistani dilemma where we discussed weaknesses thereafter coming up with a plan we called the Success Staircase.

Here are the steps which entail this plan:

It highlighted that the first step towards eradication was health education, which by definition is a positive impact on individuals, which results in a favorable behavioral change, leading to good health. Health education in primary healthcare aims to foster activities that encourage people to want to be healthy, know how to stay healthy, do what they can to maintain health and seek help when needed.

It remains the duty of all conscientious persons dealing with each other in everyday life. Therefore, it starts form “us”.

The second step towards enlightenment is sensitization. This step is overlooked by the authorities who race towards achieving bigger goals neglecting the basics.

Those who have access to healthcare services should be given a tutorial supplemented with visuals (as seeing is believing) whereas those who remain unattended and unreachable should be approached through media and community leaders. In health campaigns driven in the country so far, no special efforts have been dedicated to reach to the illiterate population. Do we and our future really require clothing labels, processed food, tea and telecommunication plans to recover our health liabilities? We need to sensitize people towards the polio endemic.

How about we incorporate polio awareness regimens with the existing advertisements? We can target the product consumed/adopted widely by the masses to spread knowledge. For example, through the mobile facility, we can extend text/pictorial messages and offer free tele-health services. Polio and publicity go hand in hand.

Back in my childhood days, I memorized a jingle that played in a short advertisement of a family planning service. I sang it like all other poems from the recitation classes. A very good example in today’s time emanates from the practice of hand-washing which is a primary step towards nipping the disease in the bud. The hand-wash product came up with a good theme and a child friendly song, bagging nationwide incentive.

My idea was to contemplate campaigns and advertisements in an entertaining approach to grab mass appeal. Instead of having crippled children look at the sight of ordinary kids performing daily activities coupled with a distressing melody in the backdrop, make the practice of inoculating fun and enamor. Bright colors, energetic theme and lively environment are definitely heartening. Even the census participation was made encouraging due to the cheerful rattle; it ran over the tube a hundred times in a day resultantly.

In addition to door-to-door services, establish and push school-to-school and community-to-community agenda forward. Bangladesh is becoming an emerging economy showing cohesive tendencies to various changes and demands. It achieved a huge reduction in poverty; there has been a growth in trade and education, overcoming most of their challenges.

Therefore, in order for Pakistan to grow into a healthy nation, we need a collective collaboration and sustenance program and adequate funds free of maneuver. Continued education and training of the health care personnel is a very important step towards the quality of implementation. The trainees should be motivated for absolute healthcare delivery. A very important aspect of this exercise remains bridging the communication gap.

Special attention should be given to areas of barriers such as social and cultural divide, negative attitudes, insufficient emphasis and contradictory messages. The trainees should also be offered attractive quality packages keeping in mind the objectives of occupational health; thereby encouraging performance and dedication. Special training and advancements should be offered to promote remote access and healthcare relief. Considering the recent event in the lawless areas, operations against and killings of charity and aid workers has gripped the localities with fear. This needs to be changed.

Emphasis upon security as a prerequisite for the protection of healthcare cannot be over-stated. All health associated movements and activities should have satisfactory safety arrangements due to various events in history that have endangered medicine and medical practice. We spent hours discussing the merits of pressing a campaign in a low profile manner where authorities could inoculate children in phases, with adequate security arrangements instead of pulling off a nationwide campaign which may not only be strenuous to supervise but also under-productive. Another idea that hit us was to offer general healthcare facilities which obviously encased the polio proposal instead of highlighting special polio camps and workers.

This attempt could smash its way into successful inoculation of a child at a routine visit and subsequent education of the guardian.

The government should re-think the measures previously taken for the medical movement; making nationwide announcements for a child friendly campaign. Local authorities should scheme initiatives entitled to gain confidence of the masses which is the gateway to reliance upon the government.

Pharmaceutical fraud is the biggest threat to the integrity of the global drug supply. With meager training and knowledge, the criminals have made their way in the market generating illegitimate profits. The impact of the convincing fakes has a potential to contribute to world health crisis. The government should run and revise inspection and subsequent quality control programs and announce strict penalties to the offenders.

Our great emphasis has been on the government abilities. Our system should realize the crisis Pakistan is falling into. We as health officials should join forces to formulate a singular agenda instead of feeding our personal motives, with a sole purpose of a Healthy Nation, Healthier Environment, and the Healthiest People.

About the author: Dr. Eman A Khaled is currently working as a Junior Resident in Diagnostic Radiology, Karachi, Pakistan. She is originally from Barcelona, Spain and also works with Pfizer and Pakistan Red Crescent Society. She is also involved in clinical research at King Fahd Medical and Research Center, Saudi Arabia.

guide to decrease polioPakistan one largest Polio effected companyPakistan Polio hazardsPolio in Pakistan. Tips to fight against poliopolio1symptoms of Polio in Pakistan
You might also like