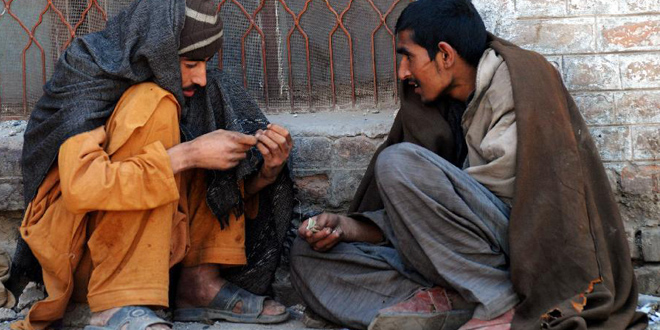 6.7 million and counting: What about Pakistan’s heroin problem?

He came in front of me out of nowhere. I swerved the car towards the left while hitting breaks just in time and heard the cars behind me screeching to a halt.

While making sure that no one was hurt and my car was safe, I saw an angry traffic police man shooing off the skinny man in rags who had walked right in front of my car while the signal was green.

He could have been the reason for a huge road traffic accident that day. As much as I was relieved, I was fascinated by this seemingly homeless drug addict who was not a slight bit phased by the chaos he had caused. I drove away watching him take his place on the footpath under the blazing Karachi sun.

Who hasn’t seen these skinny men in ragged clothes talking to themselves, sleeping or injecting drugs in their arms or thighs? Ever wondered what impact do they have on our society, where do they get these drugs from and how it deteriorates their health? I know I have. And it was this curiosity that drove me to researching about substance abuse and heroin usage in Pakistan.

There was a sharp rise witnessed in the amount of people falling victim to substance abuse in the 1970s – possibly a result of the hippie movement in the late 1960s –  and ever since then, the scale hasn’t  fallen. This issue has been over-shadowed for years by other economic, political and civilian problems faced by Pakistan.

However, this issue became an endemic after the 1980s, when the Soviet Union invaded Afghanistan and afghan refugees started flooding into Pakistan in hordes. Consequently, Pakistan not only became one of the major exporters of heroin but also became a net importer of drugs in South Asia.

One of the main reasons of Pakistan housing 6.7 million drug users (out of which four million are addicts) is that it is cheap and easily accessible. According to United Nations Office on Drugs and Crime more than 800,000 Pakistanis matured somewhere around 15 and 64 utilization heroin frequently. There are just around five million cannabis customers subject to smoking high-audit hashish called charas. Henceforth, cannabis is the most usually utilized medication as a part of the nation took after by heroin.

According to the UNODC survey 2013, people involved in drug addiction aged around 25-39 rather than 15-24. It is also highly differential by gender. While males tend to abuse plant-based drugs, women abuse over counter pain killers, tranquilizers and opiates, whereas 0.4% of the country’s population is involved in injectible drug usage. Drug addicts who come under this population have no access to sterile needles. These addicts share needles which leave them at high risk of contacting Hepatitis, AIDS and other blood-borne illnesses. Not only that, it brings Pakistan amidst concentrated HIV epidemic.

51% of the general population isn’t aware of HIV and its transmission. However, 89% of the educated population is aware of the disease. According to the 2011 report on HIV Second Generation Surveillance, carried out by the National AIDS Control Program, the overall prevalence of HIV among PWIDs is 37.8%. The prevalence of HIV varies between different cities: Faisalabad has a prevalence of 52.5%, Karachi has 42.2%, and Sargodha has 40.6%.

REASONS FOR INITIATING DRUG USE

48% of regular drug users claimed initiating drug use under influence of others according to UNODC survey 2013. Dr Jawaid Usman, department head of Family Medicine at Ziauddin University says,

“They start small and develop tolerance; after this, a time comes when they find it difficult to withdraw. There is persistent desire as it gives a sense of well-being and goodness. It is a time related thing. It gets disastrous as they get more negligent toward their duty.”

Another reason people fall to heroin addiction is poverty. The drug is freely available and takes people away from their distress and worries. 16% drug users admit to using drugs for the first time due to personal difficulties. While another 13% say they do it for enjoyment, out of curiosity or for recreational activities. 3% users thought it would enhance their sexual performance. After the few initial uses, they cannot withdraw due to physical and psychological dependency and eventually get addicted.

Drug addicts are not only at high risk of blood-borne disease due to injectables but also certain mental, neural and respiratory disorders. They develop anxiety, depression, paranoia and hallucination. They experience muscle tremors, twitching, seizures, and cardiac arrhythmia. Cerebrovascular accidents, nasal congestion (due to inhalation), nausea and vomiting are also common diseases.

“Drug addicts think if they withdraw they will die. You have to be empathetic towards them. Drug addicts are usually treated with anti depressants and antipsychotic drugs; however, the most important factor is the community-based help. Local chapters can be formed where there is awareness campaign and education.”

He also talks about motivational interviewing where you go step by step starting with pre contemplation, contemplation, action plan, implementation, maintenance and recovery. Alongside this, another form of recovery could be programs that look for innovative solutions such as Nalplant, to address lack of treatment in the country. This could be public-private venture and can essential help millions of people from falling into utter despair.