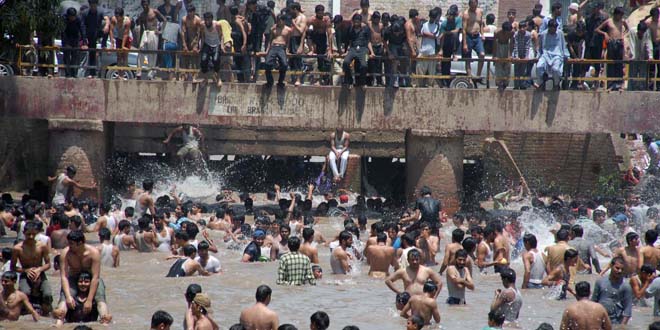 Planning to go for a swim? Check if the water has animal waste in it

Human life in Pakistan has always been at risk – be it terrorism, target killing, extortion, crime or diseases in general. But ever since summer season hit Pakistan, and brought with it a deadly spell of heat-waves, people have taken it upon themselves to put their lives at more risk.

How? By drinking and swimming in contaminated water.

Pakistan’s ecosystem is at risk because of major water pollution, which is leading to unsafe drinking water and discharge of effluents and these factors are constantly being a threat to growing society.

It should be made sure the water we drink, the water we bathe in and the water we use to wash our clothes should be clean so that our health is not compromised. We rely on clean water for our general operations and routine work. If this clean water source is eliminated, what would happen? People would fall sick, operations would halt and chaos would ensue.

The key sources for clean water are lakes and rivers that are being overdrawn and tainted with pollution and this is only because of the changes in climate patterns.

Pakistan is at health risk due to the dirty water and this is threatening the quality of life. Water from melting snow and rain picks up toxic chemicals, disease-carrying organism, trash and dirt along the way when it runs off roads and roofs and makes its way into the rivers and canals. Unclean water becomes contaminated and it is unfit for drinking.

In the midst of all of this, we see people in muddy canal waters, bathing to beat the summer heat, because it is too hot to stay indoors and the power outages do not make it any easier. What these people don’t understand is that the water in these canals is un-hygienic and carries many diseases. Swimming in open water can cause gastroenteritis, diarrhea, hepatitis A and E, urinary tract infections, typhoid, as well as Blue Baby Syndrome.

The open water these people swim in has animal waste in it as cows urinate in the same water and while swimming, the swimmers swallow the infected water. Animal urine causes Weil’s disease and this disease can cause our organs to fail and bleed internally.

Usually, people get infected when the water supply is not properly treated with chlorine. Another common bacteria caused by contaminated water is E.coli that can cause kidney and blood problems.

While people can’t afford to go to established swimming pools – as the fee is usually too high – swimming in such contaminated waters in also not acceptable. The government needs to make these people aware of the diseases that they intake by swimming in open waters.

According to UN 40 percent of the population in Pakistan dies as a result of water-borne diseases.

The drinking water quality in Pakistan is poor, the growing and vast population is not having any safe access towards clean drinking water due to which people are dying of waterborne diseases and instead of rectifying this major issue, the problem is increasing rapidly. Water, hygiene and sanitation related diseases costs Rs.112 billion per year to Pakistan’s economy. Sanitation in rural areas is worse as 88 percent of the total population is lacking the safe access to clean drinking water. Whereas filtration plants are already installed in the federal capital, yet the water is highly unsafe with microbial contamination.

The government needs to be held accountable. If infrastructure is properly laid down, power outages are minimized and sources for clean drinking water are easily available, a lot of these deaths can be stopped. But the government seems least bothered. It is time for them to wake up and smell the stench that surrounds our water bodies.