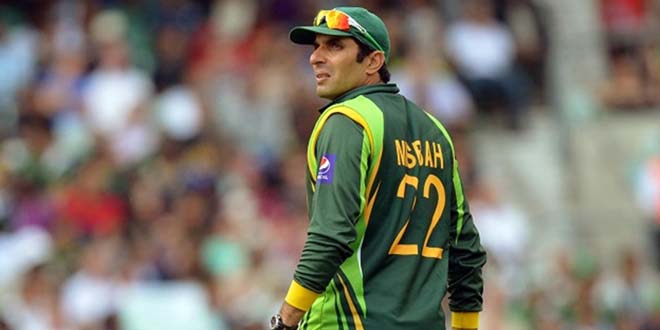 Misbahul Haq was recently named as the “best Test captain” by British newspaper The Daily Telegraph. The criteria behind the selection were his leadership skills on the pitch, his on-field batting performances and other major achievements.

Misbahul Haq took over the Test captaincy in 2010. At that particular time, the team didn’t have a good reputation since three of its major players were involved in spot-fixing scandals. Misbah was appointed to restore and make a team which would match international standards. He not only did that, but made Pakistan a force to be reckoned with in the longer format of the game. Beating the likes of mighty Australians, the feisty Lankans and the English comprehensively, he showed the world that Pakistan, under his outstanding leadership, can win if the mindset is right.

If we talk about his batting performances, he has silenced quite a few of his critics. Being blamed as a defensive player rather than an aggressive one, he has shown how important his batting has been for Pakistan and that fact is not just relevant for the Test format. With an average of 50, he is one of the most sensible batsmen in modern era.

Against Australia, he not only made the record for the fastest fifty in Test cricket history, but also equaled Sir Vivian Richard’s record for the fastest hundred as well. His half century came off 21 balls, whilst the ton was achieved in 56 deliveries. Scoring around 3000 runs in his five years of captaincy with an average of around 60, he is regarded as one of the greatest Test batsmen in the history of Pakistan cricket. He also holds the record for scoring the most fifties (15) in a single year. He achieved this feat in 2013.

Misbahul Haq will be looking to lead to take his team to victory once again in the Test format, when Pakistan faces England next in a series comprising of three Test, four One Day International and three Twenty20 matches taking place in the United Arab Emirates.

The series starts from October 13, later this year.