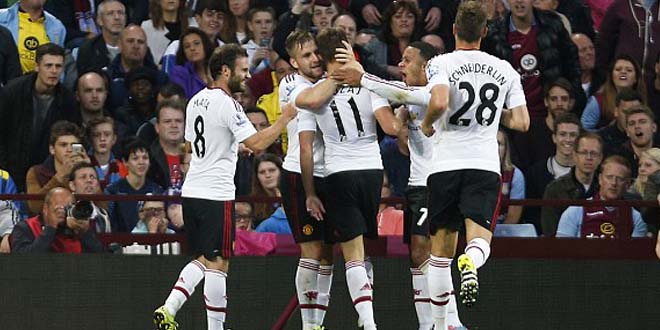 Louis van Gaal, while travelling to Villa Park, made just one change to his starting XI – he made Adnan Januzaj take the place of Ashley Young in the side. And that last minute decision paid off immensely.

Captain Wayne Rooney marshalled the side from the front as the lone striker, the midfield comprised of Micheal Carrick and Morgan Schneiderlin whilst the wings were occupied by Dutch and Spanish duo of Memphis Depay and Juan Mata respectively. Matteo Darmain, after his man of the match display against Tottenham Hotspurs, kept his place at the right back slot. Luke Shaw, starting on the left flank with Chris Smalling and Daley Blind, commanded the central defence. Keeping the Champions League play off in mind, Van Gaal picked a defensive side. Manchester United played FC Club Brugge on Tuesday at Old Trafford in the first of two legs.

The game started at a slow pace, with both teams trying to settle in to the swiftness of the game. Manchester United looked the more comfortable of the two in some early exchanges. Expecting to be a physical game, the first foul was committed by Manchester United’s Morgan Schneiderlin on Micah Richards in the middle. Both teams had an equal share of possession.

Looking to carve out spaces, Manchester United was the better team going forward. Memphis, the big summer signing from PSV Eindhoven, started on the left with Shaw in support. Fourteen minutes on the clock, Villa conceded a free-kick. Memphis whipped a superb ball with pace and curl, but Schneiderlin, unmarked on the far-post, wasn’t able to capitalize. His header went way over the bar. Most of the attacking came from the left side from the Red Devils, which was the more productive of the two wings.

Manchester United started to get the ball rolling in the midfield. The Red Devils broke the deadlock in the 29th minute, when Spanish midfielder Juan Mata carved out a pin point ball towards Januzaj. Taking the ball in his stride, he managed an exquisite turn; using his right boot he shot the ball towards the goal. The ball took a deflection and to his delight, it ended up in the back of the net. This was the youngster’s first goal since he last scored against Newcastle United in the league. Looking to reply back, Aston Villa started to press their opposition. But United’s Chris Smalling had other ideas.

Winning every duel, he was simply immaculate in performing his defensive duties. A major incident happened in the 39th minute, when Matteo Darmain and Micah Richards were involved in a clash in the penalty box. Darmian’s hands on Richards didn’t allow the Villa skipper, a clear header from the corner. At half time, Manchester United was one-nil to the good. Villa’s first attempt on goal came close to the hour mark, when Gabriel Agbonlahor guided a header towards goal, but was easily saved by Sergio Romero in goal.

At the hour mark, Van Gaal introduced Bastian Schweinsteiger and birthday boy Ander Herrera on the pitch in place of Micheal Carrick and Adnan Januzaj. In the 73rd minute, Mata picked out Memphis with an exquisite pass, one on one with only the keeper to beat. To the Dutchman’s despair, his shot went agonizingly past the post. The game finished, as Manchester United won two in two games and sat at the top of the table of the Barclays Premier League with other teams to play on the weekend.

In my opinion, the Man of the Match award goes to Juan Mata for his exquisite composure on the ball. With a superb pass, he picked out Adnan Januzaj for the only goal of the game. He is one of the players to watch this season, definitely.

Next up for Van Gaal’s men is FC Club Brugge, in the UEFA Champions League play-off game. Van Gaal and his team will be looking for a win with a good score to cement their chances of qualifying for the Europe’s most elite competition.