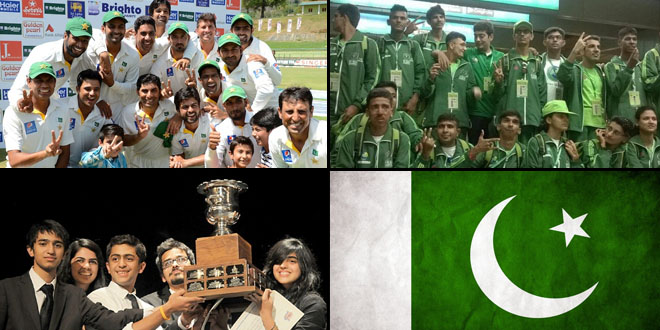 August – a month of achievements for Pakistan

For sports and co-curricular activities, the month of August has been a source of great joy for Pakistanis. Several teams represented Pakistan in different events and succeeded.

Here we will concise the events which took place during this month and in which Pakistan’s name was raised all over the globe.

Pakistan visited Sri Lanka for a cricket series which comprised of three Test matches, five ODIs and two T20s. Under the leadership of Misbahul Haq, Pakistan came out victorious with a 2-1 series win over the Lankan lions in the Test series. Azhar Ali represented Pakistan as the skipper in the One Day International series. An all-round team performance in the series saw the green shirts lift the trophy with a 4-1 series win. Last but not the least was the T20 series. Shahid Afridi and his team worked extremely hard and eventually came out 2-0 winners in the series.

A complete whitewash saw Pakistan move up in the ICC cricket rankings. Pakistan now stands at third in the Test and T20 charts, whilst eighth on the ODI.

Pakistan’s legend and team coach Waqar Younis was really proud of his players after the amazing performance against Sri Lanka. Being optimistic, he said that,

“I wouldn’t say we have become world-beaters after winning the whole tour but I would say that we are heading in the right direction.”

Something “special” happened at the Special Olympics 2015 as Pakistan grabbed 34 medals in total, which was being held in Los Angeles, US. Comprising of 55 members, the Pakistani team took part in nine events, winning medals in eight. Cycling proved to be the most fruitful as it brought six gold, two silver and three bronze medals.

In athletics, a total of eight medals (one gold, four silvers and three bronze) were bagged by Pakistan. Aquatics brought four medals (two gold and two silver). Three gold medals were won in the badminton event, whilst a single bronze medal in football. In the table tennis event, a silver medal and two bronze came in favor of Pakistan. Tennis also gave Pakistan three medals (one gold, one silver and one bronze). A pair of silver medals was won in the event of Basketball.

Asim Zar was the first person at this event to win a gold medal for Pakistan. He won the medal in the 100m freestyle event.

Team Pakistan came out victorious in the Karl Popper Debating Championship (KPDC) which was held in Mexico. They won the title after passing through six preliminary rounds, three elimination rounds and then the grand final. Team Pakistan defeated South Korea in the final. Not only did they win, but their three speakers were listed in the top 10 rankings of the competition.

These events show us how much potential Pakistanis have and, if cultivated properly, our youngsters can take this country to a whole new level of progress and development.

Here’s to these Pakistani heroes!