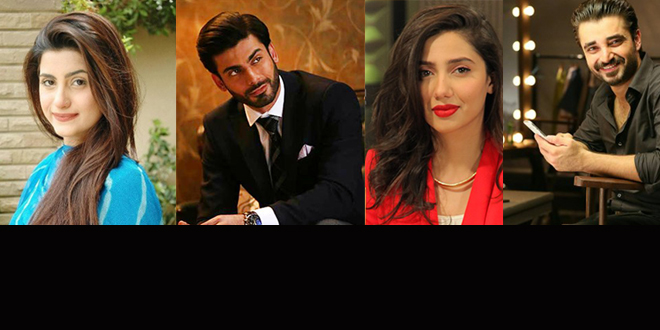 Small Screen to Silver Screen: Top 5 Actors Who Made Their Way to the Movies

Many actors that exist today in the Pakistani film industry, made their way through the small screen. These actors have rectified their performance on and on making their name not only famous but, successful all around. Let’s take a quick look at these 5 small screen actors who, with their talent and outstanding performances, made their way to the silver screen. The first and foremost actor who has Pakistani flags waving with pride all across Asia. Fawad Khan is one of the leading Pakistani actors who is a true jack of all traits. Be it his stunning drop dead gorgeous looks, his amazing acting skills or his husky like voice, this man has it all. He not only acts but, has catered his fans with music as well being the lead vocalist of his band Entity Paradigm. Fawad made his first public performance through a high school play directed by Manal Butt, which was judged by Shahzad Anjum who extracted Fawad and helped him to enter the showbiz world. Fawad starred in many famous dramas such as Daastan, Humsafar and Zindagi Gulzar hai. He debuted on silver screen in Shoaib Mansoor’s “Khuda Ke Liye”. He also made his way into the Bollywood film industry debuting in “Khoobsurat” with Sonam Kapoor. There is no stopping this man as he continues to win the hearts of people all around the world with his literal ‘prince charming’ charm. Mahira started her showbiz career at the age of 16 as VJ and started her show at MTV named “Most Wanted”. She then hosted “Weekends with Mahira” on Aag TV Channel. She became an instant hit as VJ and changed the trend of VJ shows in Pakistan. She made her TV debut with the drama serial Neeyat in 2011 the drama was a commercial flop and it was commented that Mahira couldn’t act.

But then she appeared in “Humsafar” opposite Fawad Khan and this drama became a blockbuster receiving the highest TRP any Pakistani drama ever got. It became the most appreciated Pakistani drama overseas. She made her acting debut from Shoaib Mansoor’s film “Bol”, the movie became an instant hit and Mahira’s acting was highly appreciated. She had won 5 awards up till now 3 awards for best actress and 1 award for best on-screen couple with Fawad khan. She also worked in drama serial “Sher-e-Zaat” and appeared in a cameo role in “Coke Kahani”. She recently gave two box office hits, “Bin Roye” and “Ho Maan Jahan”. She is also making her debut in Bollywood against Shahrukh Khan in “Raees. ” Originally from Lahore, Manzar Sehbai has had a lifetime of acting background. From being a dynamic individual from the Dramatic Society at the Government College, Lahore, he rose to distinction with Dark Room, a showy artful culmination that he performed with Usman Peerzada, Imran Aslam and Shoaib Hashmi in 1967. Sehbai was thusly associated with the Pakistan National Council of the Arts in 1973. After pioneering in experimental theater with Sajjad Haider and Saleem Chisti, and doing various plays on TV Channel, Sehbai graced the prestigious Rawalpindi Liaquat Hall with two super hit plays in 1974: “Ki jana main kaun” (which was composed by his sibling, Sarmad Sehbai) and a remake of Dark Room. This was the time when he headed for Germany and denied the numerous yearning performers of a symbol to gaze upward to. He returned in 2006 and played the primary character in PTV’s screen adjustment of “Manto’s Toba Tek Singh”. His late extra large screen venture with Shoaib Mansoor, “Bol”, is at long last getting him the acknowledgment he merited long back. Sohai started her career as a model. She also did a few stage plays like ‘Bombay Dreams’ before finding her way on the small screen. She has done many commercials like Pepsi, Coca cola, Mobilink, Shan pickle. Sohai made her acting debut with the serial “Saat Pardon Mein” which was telecasted on Geo TV. Alyy Khan and Mikaal Zulfiqar worked opposite her. She debuted on the silver screen in Pakistan in the romance-comedy film ‘Wrong Number’ against Danish Taimoor. She acted in second Pakistani film ‘Jawani Phir Nahi Ani.’ Hamza Ali Abbasi is a Pakistani theater, film and TV performing artist, model and director. He is best referred to for his part as Afzal in dramatization serial “Pyarey Afzal” and Azam in show serial “Meray Dard Ko Jo Zuban Miley”. Abbasi started his acting career from theater play “Dally in the Dark” in 2006 which was Shah Shahrahbeel’s creation. While in films he made his premier in a short film “The Glorious Resolve” (2010), a bearing of Bilal Lashari. In 2013, he showed up in highlight movies of Pakistani Cinema, “Main Hoon Shahid Afridi” and “Waar” for which he got Best Star Debut Male and Best Supporting Actor at first ARY Film Awards, respectively. He got acclaimed for playing parallel lead in the lighthearted comedy “Jawani Phir Nahi Ani” (2015).