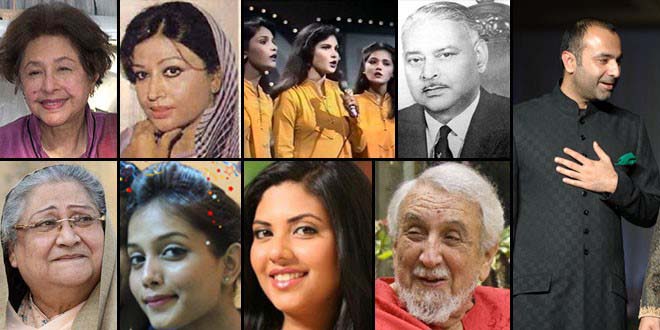 Nine non-Muslim Pakistanis who have made us proud!

Pakistan comes in the top ten countries with the largest populations in the world, holding a spot at number six. This large population of Pakistan constitutes of citizens coming from various religions, under one flag.

Even though Pakistan was created to be an Islamic state, our founder Quaid-e-Azam Muhammad Ali Jinnah, opened Pakistan for all religions. Just like Islam is meant to have respect for all religions, Pakistan is a combination of different religions all coming together. So, on this Independence Day, H TV would like to celebrate the non-Muslim Pakistanis who have made us proud over the years.

He was Pakistan’s fourth chief justice from 1960 until 1968. He was a Christian by faith and was commissioned into the Indian Civil Service and also appointed Assistant Commissioner in West Punjab. In Lahore High Court 1943, he started his judicial career which led him to join the Justice Department. He also served as the law secretary for Law Minister Jogendranath Mandal and Prime Minister Liaquat Ali Khan. He was also elected as the eighth chairman of the Board of Control for Cricket in Pakistan (BCCP) from 1960 to 1963.

They were one of the most famous bands in the 1980’s. Nareesa, Shabana and Beena Victor were the three daughter of Benjamin Victor, who took their father’s first name to title their band. They sung many songs on TV throughout 80’s and 90’s. They gave us famous songs like Gari Slow Chalana Baboo and our hearty national song Is ParchamKe Sai Taley.

She was one of the top leading actresses of Pakistani cinema in its early days. She was the queen of silver screen for more than 20 years. She gave Pakistan most its evergreen films such as Aaina, Bandish, Chanda, Aakhri Station, Andaleeb and Dooriyan. She married Robin Ghosh and moved to Bangladesh.

He is one of the most renowned names in Pakistan’s fashion industry. He has been recognized internationally and is considered an acclaimed fashion guru. He also made Pakistan proud by setting his name in the Guinness Book of Records by creating the world’s largest kurta. The kurta was 101-feet-long, 59-feet-3-inches wide and weighed 800 kg.

She is a leading English novelist from Pakistan. She is a Parsi and is best known for her work to be collaborated with Indo-Canadian filmmaker Deepa Mehta. She is most famous for her novel Ice Candy Man which she wrote in 1991, and later became the basis for Mehta’s film Earth in 1998. Her novel Water was inspired from Mehta’s 2005 film Water.

He was a leading Pakistani newspaper columnist, social activist, and philanthropist. He belonged from Karachi, thus his columns were in the country’s oldest daily English newspaper, Dawn. He was also the chairman of the Cowasjee Group. Due to being engaged in many philanthropic activities, he was considered as an old “guardian” of the city Karachi. Institute of Business Administration (IBA) launched the Ardeshir Cowasjee Centre for Writing in his honor in Karachi on November 3, 2013.

She has been a very famous name in the TV industry of Pakistan for years. Be it Sultana of Angan Tehra or Bibi of Tanhaniyan, this artist has done a tremendous job in filling laughter in our lives with her excellent acting skills. She is very much known to be a character of the elderly age on TV but many people do not have knowledge to how deeply associated she is in the field of education. She did her intermediate college and graduation from Kinnaird College in Lahore and later opted to the University of Baltimore in USA for her MBA. But she didn’t stop there. She attained her PhD from the University of Toledo, Ohio in Educational Administration. She also has direct links with Prithviraj Chauhan.

She is one of the top models of Pakistan. She has been a showstopper to many of the top-notch Pakistani fashion designers as well as acted a leading role in dramas like Mera Saein. She is now married to Ahmed Hassan.

This name is not known to many but she is a personal pride of my own. She is a famous dancer and co-choreographer to many stage plays in Pakistan and abroad. Seeing her on stage has always been a treat, as she is like a swan on her feet. She has been the leading dancer to plays such as Avanti, CinderJutt, Sorry Juliet Romeo Loves Paro and she debuted internationally in Ajaanta.

There are many more personalities that are non-Muslims and have outdone themselves as Pakistanis to hail our nation’s name with pride. We honor you, not just today but for all the days you have been there to make us proud Pakistanis.