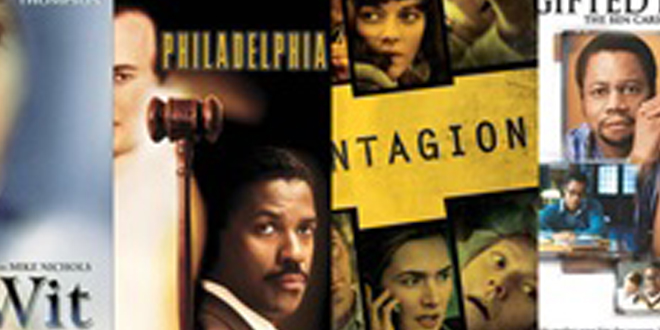 Learning to be a doctor is not a piece of cake. It requires a lot of hard work and ability to cope under pressure. In the world of a medical student, studying medicine and finding better ways to grasp this enormous field is all that they aspire to do. And this, of course, can get exhausting.

Therefore, in order to give them a little bit of motivation, here is a list of five movies that every medical student should watch – so they can get entertained as well as inspired.

Wit was released in 2001, starring Emma Thompson, Christopher Lloyd and Eileen Atkins. Wit is based on a play of the same name by Margaret Edson, in which a challenging and rigid English professor, Vivian Bearing (played by Thompson), is diagnosed with terminal ovarian cancer. The movie discusses the journey of a cancer patient, as Bearing realizes her condition, how she has lived her life and what she should have kept as her priority. She is under the care of Jason Posner who is a former student of hers, and only discovers faith by being a doctor; Susie Monahan, the nurse who is depicted to be the only human compassionate to Vivian’s condition; and Dr. Kelekian, who’s a renowned doctor but only requires results no matter what they may be.

I think this movie should be watched by every medical student as it reflects on how the patient feels when they go through such a state. This will help them to empathize with their patients and help them understand their perspective.

Philadelphia was released in 1993, starring Tom Hanks, Denzel Washington, Roberta Maxwell and Buzz Kilman. A gay lawyer named Andrew Beckett (played by Hanks) is infected with AIDS. The employees of the firm start to become resilient towards him in fear that they might contract AIDS from him. This results to him being fired. After he is fired, he decides to sue his former law firm with the help of a homophobic lawyer, Joe Miller (Washington). As the case goes on, Miller realizes as he sees the reaction of different people to Beckett, that he is no different than anyone else despite having AIDS, which helps him overcome the fear of contracting the disease.

While it has little to do with doctors, this movie was added to the list because it showed the social taboos that are associated with certain diseases, and it is up to our doctors to change such mindsets and provide treatment to all – irrespective of their past or their identity.

Gifted Hands: The Ben Carson Story was released in 2009, starring Cuba Gooding Jr. This movie is a true story about a renowned neurosurgeon who overcame hurdles in life to reinvent the course of medicine. Ben Carson grew up in a broken home, in the age of poverty and racial interventions, which reflected upon his grades and temper. His mother however never lost faith in him and encouraged him to go for the opportunities she never had. She became his strength of imagination, intelligence and made him believe in himself. That faith in himself became his gift leading him to follow his dream of becoming one of the world’s renowned brain surgeon.

I actually prefer this movie, as I was truly inspired by the ambitious of Ben Carson and his willingness to be a doctor. This is a definite must-watch for all those who want to make their dream of becoming a doctor a reality.

The Doctor was released in 1991, starring William Hurt, who plays Jack Mckee. Jack Mckee is a doctor that has it all – success, wealth and a fabulous life – until he is diagnosed with throat cancer. Being a doctor himself and being in the hospital day in day out treating patients, he now sees the perspective of patients by being one. He understands that being a doctor is more than just surgeries and prescriptions.

This movie is for all those medical students who think that being a doctor is all about the procedures and treatments. It’s not; a doctor is so much more, and this movie highlights it perfectly.

Contagion was released in 2011, starring Matt Damon, Jude Law, Kate Winslet and more. This movie is about how experts, government authorities and regular individuals end up amidst an overall scourge known as Pandemics, as the CDC attempts to discover a cure.

This movie a must-watch as it shows how an infectious disease can spread across the world in almost no time, requiring that any and every medical issue should be dealt with promptly and effectively.

While there are many other movies that doctors and medical students might enjoy watching, these are some of the movies that are my favorite. If you have something to add to this list, feel free to comment below.