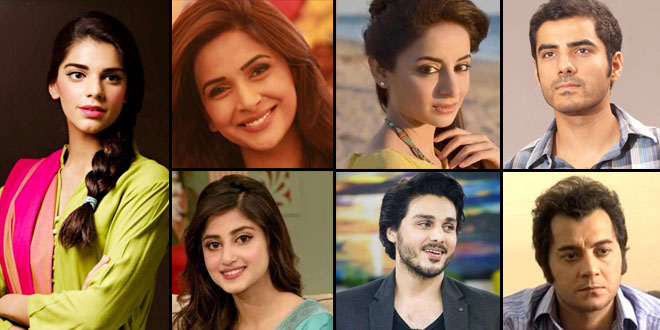 7 TV actors who should work for the big screen

Pakistani film industry is in its growing stage these days. Its work is subjected to criticism as well as appreciation; trends are changing tremendously.

While on one end films like Bin Roye are being criticized for not having a film like feel, on the other end, actors like Humayun Saeed are throwing appreciation parties for all those who contributed their share towards Pakistani cinema revival.

However, even though the big screen has seen a few new faces like Janita Asma, many of our well seasoned actors have not signed up for a film yet. This seems to show that these actors have somewhat been sidelined or perhaps they are waiting for ‘the right movie’ to show up or they are simply not available due to their busy lifestyle.

Here are some TV actors whom we all would love to see on the silver screen but somehow are not making it to the cinema.

We adored her in theater appearances and we all love her on television. She has made a huge fan following in no time. Talented on-screen artist and model Sanam Saeed made her screen debut with the drama serial Daam. In Mehreen Jabbars serial, Sanam performed exceptionally well and made a strong hold in the industry. She has played numerous capricious characters and has startled people and faultfinders alike. Kashaf Murtuza from Zindagi Gulzar Hai is one individual we would all want to see on the silver screen now. From theater to Best tv Channel, her exhibitions all through her profession have been exceptionally convincing. Sanam’s performance in Zindagi Gulzar Hai left everyone speechless. She did a great job. I wish her all the best for her silver screen career – which is yet to start.

Sabar Qamar, even at the age of 30, never fails to own the screen with her appearance. She is tall, sexy and bold with a well-maintained on screen figure. Saba is now a senior refined TV artist. Saba was offered a Bollywood film some time back which she rejected without batting an eye. Reasons for doing so are still unknown. Saba has made her way through the industry in style. She is always some way or the other on the screen. From TV commercials to drama serials, sitcoms and hosting shows, Saba has done it all. Having a mixed bag of Best tv dramas, some of her most memorable and versatile performances incorporate Dastaan, Bunty I Love You, Pani Jaisa Piyar and Maat. She has increased her prominence and fan base with her most recent performance in Digest Writer on Hum TV. Having won a few honors for her work till now, she made her big screen debut from Kambakht, a movie that more or less went unnoticed. Saba Qamar is all set for the big screen again now. She deserves a high budget movie that is marketed well.

The youthful 20-something Sajal Ali is a Pakistani performing artist and model. Sajal has been doing best tv serials since three years now. The cute and innocent face is now quite popular all over the industry. She began her career with the serial Mehmoodabad Ki Mailkain and since then has been signing dramas on and off. Sajal has done quite a few TV commercials and knows how to stay under the lime light. With a likeness to a much more youthful version of Kareena Kapoor, she could be one of the new young female artists cast opposite Fawad Khan or Imran Abbas. Sajal could be a jackpot for the Pakistan film industry and should not be missed.

The exceptionally skilled actress, who sparkled in the drama serial Meri Zaat Zarra-e-Benishan, is most likely one of our top actress. Sarwat worked in a telefilm in 2013; however, we are certain her fans can hardly wait to see her doing some essential parts in movies. Sarwat as of late did a short film named Baat Cheet, however, again the silver screen status is yet to be accomplished. Sarwat is a veteran performer of the business and ought to be utilized for some conspicuous mature roles in our upcoming motion pictures. She might not know how to dazzle you with glamour or looks but she knows what acting truly means.

Ahsan Khan is a savvy and splendid Pakistani on-screen actor, host and entertainer. He has worked for a wide range of drama serials and soaps and seems to be the perfect man to hit the silver screen. Ahsan is tall, handsome and has got what it takes to be a star hero. Ahsan has been winning hearts with his charm and he can be the next big thing Pakistan is looking for.

Adeel was seen as Jamshed in Jackson Heights. The on-screen character is full of energy and talent. He is enchanting, smart and has a few features resembling John Abraham. Adeel has not worked a great deal for the business till now, however, the little he has done says a lot for itself. Adeel is, to a great degree, a gifted on-screen actor and ought not to be squandered. Adeel has performed for fruitful drama serials like Mata-e-Jaan and Muhabbat Subh Ka Sitara Hai. With his expressive acting and alluring looks, we trust Adeel Hussain would do amazingly well on the silver screen.

Kashif Mehmood is an extremely talented, high-class Pakistani on-screen actor who is renowned for his amazing exhibitions in tough and difficult roles. He began his acting vocation in 1993, working in-stage plays. Kashif seems to be a well-groomed and elegant man who never fails to impress you with his confident acting skills and charm. He is all set for the big screen without doubts.

Pakistan is doing well to make a comeback and produce world class films; however, talent should never be wasted or overlooked. All these ENTERTAINMENT TV Channel actors are good and deserve more quality work from the industry. Producers and directors should not miss out on such talented people present right under their nose.