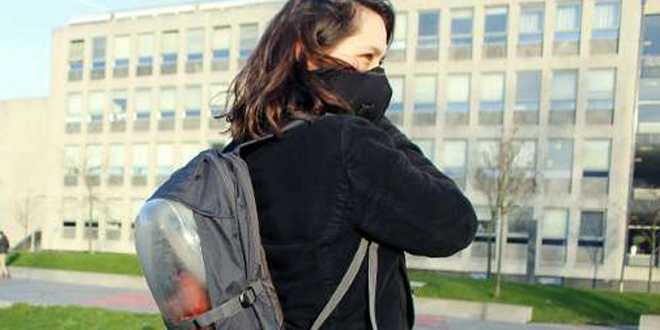 Five Dutch students have hit on a unique idea to replace face masks used against air pollution, and are developing a “plant backpack” to give wearers instant fresh air.

“The bag allows fine particles to be filtered out and cleans the air,” said Marnix de Kroon, the leader of the team.

“The Plant Bag” is fitted with a filter which takes in the outside air and sifts it through the roots of a plant housed inside the backpack before allowing the wearer to breathe it in.

Even though the idea is still in early stages, it won a Dutch design competition, and the students at TU Delft University have moved to the next stage of making a prototype.

“We are testing which plant will work the best, and it seems that aloe vera may be a possibility,” De Kroon told AFP.

However, an expert from the Netherlands weather institute said such a design would not be very useful.

“The filter alone will sift out 99.9 percent of the fine particles,” the Dutch daily Trouw quoted the expert as saying.

De Kroon however insists that the plant will catch the smallest of the microscopic particles which can penetrate deep into the lungs and trigger varying health problems.

“This product may not take off very quickly in Europe, but cities like Beijing and Tehran, cities with serious pollution problems, will be our main market,” he said.